When docking at Naples there are plenty of places to visit from the port as you are able to visit Capri, Pompeii and Sorrento. When docked in Naples you will be able to see Mt Vesuvius which is the second most dangerous volcano and is still active and has destroyed a nearby town called Pompeii.

For this port of call we decided that we would book an excursion which we booked onboard the ship with NCL, we did Views of Naples. The excursion was only approx 5 hours long but we also got a free drink or ice cream included. Our guide was called Marco who was a local and was very knowledgeable about the city.

Our first stop on the tour was to the large public square in the centre of Naples known as Plazza del Plebiscito where Basilica Reale Pontificia San Francesco da Paola is located. This is a prominent church which is a reminiscent of the Pantheon in Rome. It is fronted by a portico that is resting on six column and two pillars.

For our drink/ice cream we were taken to Galleria Umberto which is a public shopping gallery located across from the San Carlo opera house. This gallery was built between 1887 and 1891 and designed by Emanuele Rocco. The gallery was name after the King of Italy at the time of construction. The gallery features a glass dome which is braced by 16 metal ribs.

During the tour we went to the Royal Palace of Naples also known as Palazzo Reale di Napoli which is a museum as well as a palace. We were also taken to a photo spot so that we where able to see the bay of Naples from above and get photos. 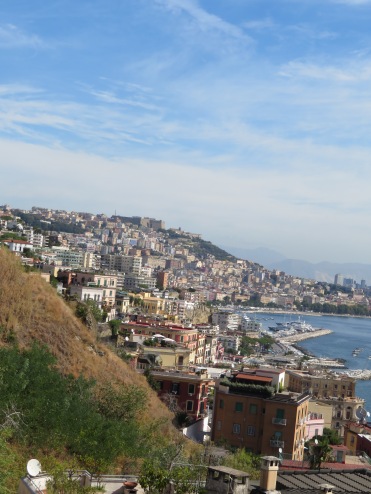 Depending on where your ship docks you will be able to see Castel Nuovo which is a medieval castle that is located in front of Piazza Municipio and Palazzo San Giacomo. Castel Nuovo was first erected in 1279 and was a royal seat for kings of Naples. Palazzo San Giacomo which is the city hall is a neoclassical style building which houses the mayor as well as the offices of the municipality of Naples.

Naples is a very busy city where I would recommend booking a shore excursion.

Is Naples a city you’ve been to before?

One thought on “Port Guide: Naples”